Although the spotted trout is much larger and more common trophy amongst fisherman, the smaller sand trout shouldn’t be written off too quickly. It’s a common fish in the Gulf of Mexico and easy to catch, making it a fish that can save otherwise unsuccessful fishing trips. Other things that make this a popular fish are its good taste and that in many states there are no bag or size limits. If you’re planning a fishing trip to the Gulf Coast you should be ready to catch some sand trout (commonly called sand seatrout), whether or not they’re the fish you’re after.

Where to find Sand Trout – habitat and food sources

The sound trout’s habitat is the warm waters in the Gulf of Mexico. From southwest Florida to the Bay of Campeche, although they have been reported in extreme southeast Florida and are most common along the northern coast of the Gulf. More specifically they can be found in bays, canals and brackish rivers that are deeper than 10 feet. If you’re looking for larger catches you’ll have better luck in deeper areas, although shallow areas can be teeming with sand trout as well. They feed on shrimp and small fish. So, if you’re fishing in these areas how to distinguish sand trout from other kinds of trout, the spotted trout (aka speckled trout), silver or gulf trout and the gulf whiting.

How to identify Sand Trout (not mistake them for speckled trout, gulf trout or a whiting) and records 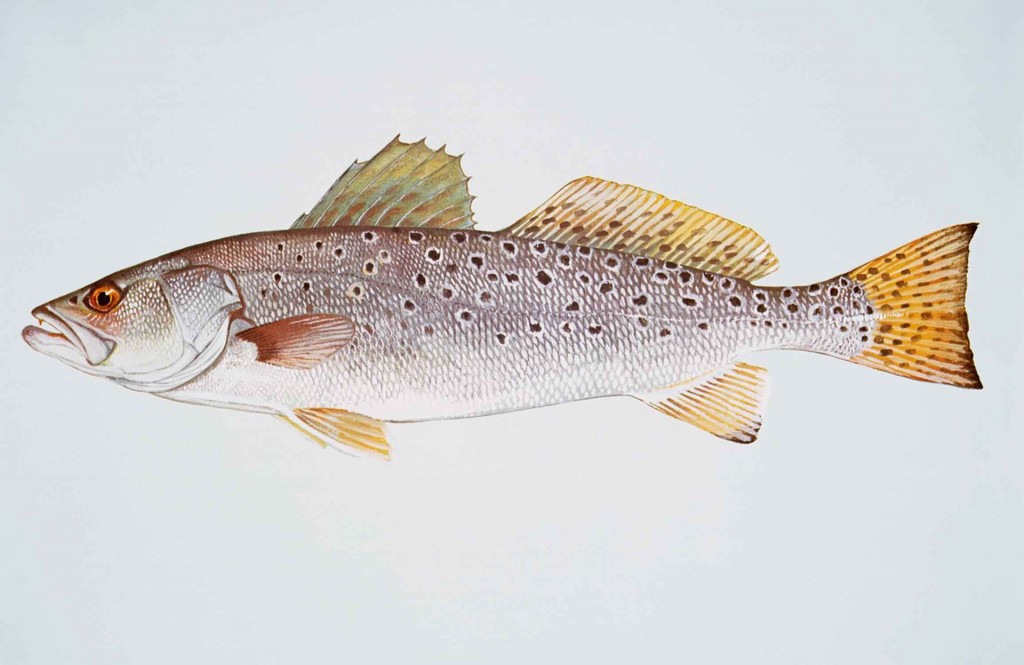 If you’re wondering just how much larger spotted trout are when compared to sand trout: the largest sand trout on record was caught in Texas and weighed 6.25 lbs., this stands as the Texas, U.S.A and world record, the Texas record for a spotted trout is almost 16 lbs. An average sand trout is between 1 and 4 lbs.

Before going on any fishing trip make sure you look into getting the proper fishing licenses and find out what the current bag and size limits are. Park rangers, Department of Natural Resources, which ever agency you’re dealing with, they aren’t joking; I’ve had more luck getting warnings for speeding than for seemingly minor infractions while on the water. So, if you’re in one of the states with sand trout fishing here’s a quick break down:

Even if a state doesn’t have regulations specific to the sand trout a fishing license may be required depending on the itinerary of your trip. Make sure you check before heading out, nothing ruins a good fishing trip like a hefty ticket.

When’s the best time for sand trout fishing and how to catch them?

Once you have everything taken care of with your fishing license and you know the bag and size limits, when are you going to have a chance to catch sand trout and what the best way to go about catching them?  Sand trout can be caught all year long except for winter, it is the Gulf of Mexico after all, there are only spring and summer really. You can have some good luck at night and during the day, but at night you might want to use a special technique that we’ll get to in a second. It’s almost universal among anglers that the best bait for sand trout is cut fish, croaker being a favorite. Another common bait is the sand eel, used in a variety of rigs.

Sand eel is a widely recommended bait for catching sand trout, even if it isn’t as widely used as the croaker. Before starting make sure to let the sand eel thaw out, if frozen, and then cutting off the head and the tail is the most common practice. Some prefer to leave the head on, believing it makes a more appetizing lure for the trout. If you’re looking for an easy and effective way to rig a sand eel, I advise checking out this approach. It’s from the UK but I think you could have decent luck with it on the Gulf coast too. 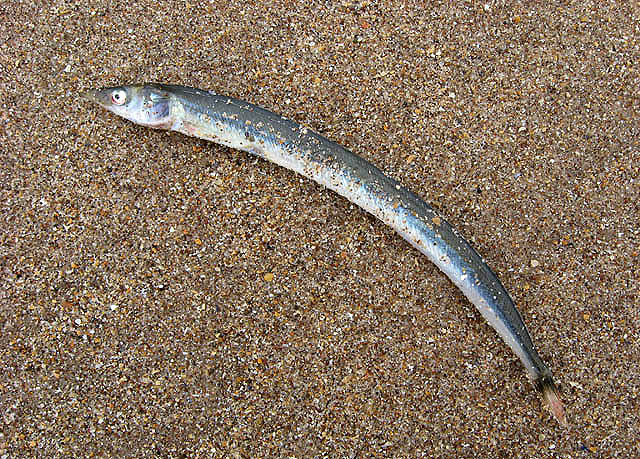 There are a lot of artificial sand eel rigs available online too that do a really good job at recreating the movement of a live fish. Here’s one approach to using a sand eel jig. Head out at night and shine a light into the water. Bounce the jig off the bottom as you reel it in. The movement combined with the light will cause the sand trout to bite aggressively and hopefully lead to a successful trip.

What to do after catching a Sand Trout?

If it’s your first time catching a sand trout you probably have a few questions: should you release it, is it any good to eat, how to stock it, clean it, and what about spaghetti worms? If you’ve caught them before, you’re already frying it up so skip this section.

Whether you should catch and keep or catch and release really depends on where you are and why you went fishing. Since most areas have no bag or size limits, the real question is how much do you want to eat, or more accurately, how many fish do you want to prepare? If you’re in the Weakfish Management Area remember that you can only catch one, so be picky. But in most places, if you haven’t caught enough to eat, keep catching.

Is it even good to eat? How do you clean sand trout?

The answer to the first question is easy; absolutely, if cooked properly. There are a few ways to cook them which we’ll get to in a minute. Before you can cook them you need to clean them, here’s how to do that step-by-step:

See a video about cleaning trout fish: If illustrations would help you, check out wikiHow.

One thing you might find while cleaning it that might convince you to never try eating another sand trout again is a spaghetti worm (eupolymina crassicornis). It got the name “spaghetti worm” for its pasta like appearance and tentacle like appendages. Despite being named after spaghetti; it doesn’t look appealing in the least. Many fishermen mistake one or two worms for many more because they tend to get cut up during the cleaning. Despite their appearance, you can eat the spaghetti worm with no ill effects. The worm can easily be removed or simply left in during cooking. After cooking it won’t be noticeable and will become tasteless. If you don’t believe me feel free to check with the Louisiana Fisheries.

Stocking sand trout: to freeze or not to freeze?

You should never freeze sand trout; the meat won’t handle it well. When you catch it you can go ahead and put it on ice, and put it back on ice after fileting, but freezing it is never recommended.

The good part, cooking a sand trout and recipes

There are a few common ways to cook sand trout. The most common being frying, grilling and baking. One way that’s becoming more common with the rising popularity in Central and South American cooking is making ceviche from sand trout.

Let’s start with the classic pan fried recipe. After cleaning the sand trout, you can either cut it into strips or fry it whole. Remove the fins and scales, dip in a mix of egg and milk, roll in flour and then fry in a pan until both sides are golden brown. A deep fryer is another great way to do it if you have access to one. You can use whatever seasonings you’d like. Cajun spices are a common one. I’d recommend Old Bay or even trying pecan flour.

If you’re baking or grilling a sand trout, I can’t begin to tell you which recipe might be the best. Everyone has a recipe that they came up with or was passed on from friends and family. Finding which one you like best take a lot of trial and error, which just means more time fishing and eating fish. Not a bad deal if you ask me. I can tell you it takes between 20 and 30 minutes to bake a sand trout and between 15 – 20 to grill one. When the fish is done the meat should flake apart, be sure to always test at the thickest part of the filet.

Now, one of my personal favorites. Sand trout ceviche. Ceviche is the practice of cooking fish in citrus juices, lemon and lime are both used depending on which country a recipe is from. I have most commonly had ceviche cooked in lime juice. First, cut the fish into ¼ inch cubes and cover the cubes with freshly squeezed lime juice. Put it in the refrigerator and let sit for 2 hrs. This will cook the meat, once you strain off the lime juice you can add whatever ceviche recipe you want. I’m looking forward to trying out this one.

Wrapping it all up

The sand trout is a small cousin of the spotted trout. Even though the spotted trout is more widely sought as a trophy fish, the sand trout shouldn’t be overlooked. It’s large numbers and great taste can make it a great fish to catch even if it won’t be winning any records. It has a pretty large geographic habitat. Spanning from southeast Florida on one extreme and stretching across the northern part of the Gulf of Mexico. This area spans a few states and federal areas, make sure you know which licenses and regulations apply to you before fishing. Cut fish and sand eels are popular bait for catching sand trout, try heading out at night with a sand eel jig to really get them biting. Cleaning them is like cleaning any other trout, just smaller. If you don’t want to fool with cleaning such a small fish, go ahead and cook it whole. The spaghetti worm isn’t harmful, despite what your eyes may tell you. There are a thousand different recipes out there for baking, grilling, frying and making sand trout ceviche. The only way to find your favorite is to get out, catch more fish and eat more!

Andrey is manager of OutdoorNinjas online journal, working on creating compelling content about outddor activities, such as hunting, fishing, camping and others